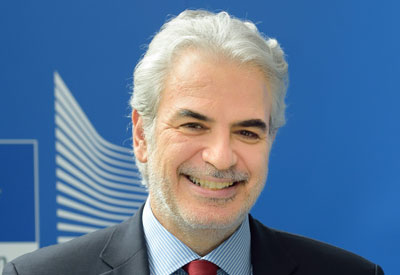 Christos Stylianides is the former European Commissioner for Humanitarian Aid and Crisis Management (2014-2019). On October 24th, 2014 he was appointed by the European Council EU Ebola Coordinator and served until the end of the term of the Juncker Commission.

He is currently Visiting Professor in Practice at the Department of Health Policy of the London School of Economics (LSE), Faculty Member at the University of Nicosia Medical School and Visiting International Professor at Ruhr Universität Bochum (RUB) Research School and Special Advisor, European Commission (to Vice President Margaritis Schinas) on Education in Emergencies, migration and inclusion.

He was elected Member of the European Parliament in the May 2014 European elections where he served until October 31st 2014. He was twice appointed Government Spokesperson of the Republic of Cyprus (in 2013-2014 and in 1998-1999).

Christos Stylianides was named “Global Champion for Education in Emergencies” by Education Cannot Wait (ECW) and “Political Champion for Education in Emergencies” by the Malala Foundation. He received a number of honorary awards including: the Golden Decoration of Honour by the Federal Agency for Technical Relief (THW) of the Federal Republic of Germany, the “Their Inspiration Award” by the Their World and the Global Business Coalition for Education, the Gernika Prize for Peace and Reconciliation, the “Andreas Yannopoulos” Award by the Smile of the Child in Greece, the “Yannos Kranidiotis Award” for his contribution to the European project, the “Democracy Award” by “Politia” (Cyprus). He also received the Highest Honorary Recognition by the Eastern Macedonia and Thrace Institute of Technology (Greece) and Honorary Recognition by the “Elpida” Foundation (Greece).