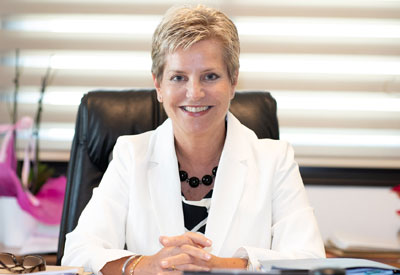 Mrs. Vassiliki Anastassiadou was born in Nicosia in 1958. She studied Law at the National and Kapodistrian University of Athens and holds a post graduate studies Degree in European Law (LLM in European Union Law) from the University of Leicester.

From the position of the Secretary General of the Parliament, in addition to the above, she worked for the promotion of Parliamentary Diplomacy, the successful implementation of the overall parliamentary work, as well as the support of all the activities of the House and its President. She was the administrative head of the staff of the House of Representatives.

Mrs Anastassiadou, appointed by the President of the Republic of Cyprus, Mr. Nicos Anastasiades, assumed office as Minister of Transport, Communications and Works on the 1st of March 2018 until the 1st of December 2019.

Since 1st June 2020 she has been appointed as an external member of the Council of the University of Cyprus upon selection by the Senate.  She is the Chairperson of the Personnel and Regulation Committees.